Since my last trip to Scotland, there is one story that I have been rabid to tell: my cross-country excursion from the Bone Caves to the Inchnadamph Lodge in Assynt. As I was planning my talk to the Friday lecture group at the Cumming centre, a community centre for seniors, I carefully examined the map I had with me and the routes sketched out on my number one Scottish Walking Resource, Walkhighlands. I wanted the people listening to KNOW how it felt, to see the obstacles, and then get past them with me. The telling (or retelling) of an event lets me relive it again, and given that the opportunities to redo these meanders are rare, I take what I can get. 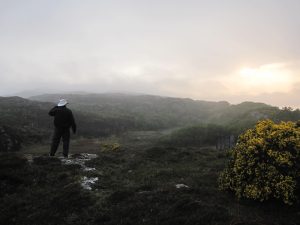 I spent May 2018 walking in Scotland, with a week in the region known as Assynt, where my brother and I spent a lovely albeit frustrating 2 days back in 2014. It was far to go that first trip, which lasted all of two weeks, but Walkhighlands had described one walk, Cul Baeg, that seemed delightful.  I had no idea how far north it actually was, nor how different it would be from the (life changing) four days of the West Highland Way I had just completed. I finished neither walk, but I did get a taste of that fantastic, rocky, barren landscape that had been pushing its way to the front of my brain since.

For this trip, I thought I could complete one or two days of one of Scotland’s most rigorous long distance walks, the Cape Wrath Trail, that traverses the region. I consulted the oracle (Walkhighlands Forum), and determined that it was unrealistic, but there were so many fantastic walking possibilities in the area that it was worth a week of my time (see walk report here).  I walked everyday but one while I was there, and most of them were challenging routes amid incredible beauty. Why I chose to describe this one in detail is not a matter of chance. On this walk, I was the most challenged and the most frightened, and yet the rewards were the greatest. It was tricky, I was alone, and, finally, the time I spent in the centre of this place did not disappoint.

I had decided to try to walk from the Bone Caves back to the Lodge. It was one of the missed routes from the 2014 trip: we were never even close, mon frère et moi, but we had walked for close to three hours back through the glen that stretched away from the same Lodge. With the right map, the route seemed straight forward, past the Bone Caves, up the burn or river, across the bealach between two hills, and back around through that same glen at the base of (what I now knew were) Ben Mor Assynt and Conival. I was convinced that the caves were just a short way from where my brother and I had turned back four years ago.  I was very wrong, but never mind.

This was a walk ‘across country’ – no actual paths that I could discern on my OS map, or on the Walkhighlands site.  However, the land forms that enclosed the route were mightily distinctive and included one of the few Munroes (mountains over 3000′ in Scotland) in the area. They would be hard to miss. I am not a confident walker, especially going where no Frances has gone before and without distinct paths or signs. In these situations, my mantra is ‘I can always go back’, as I make sure I always have a view back from where I came.

I did start on a very clear path; from the Bone Caves Walk Parking lot. I was dropped off by a hostel friend, on his way back home (why are you letting me off here, can’t you tell I’m CLUELESS!!!) but internal dialogue is just that, silent, so he waved encouragingly as he drove off, having arranged to meet up the next week on the Fife Coastal Path ( if I SURVIVED).

The first part of the walk was fairly straight forward.  I was moving away from the road and into the landscape but I don’t remember much of those early views.  As clear as that path was, I managed to miss the turn off to the right to visit the Bone Caves. 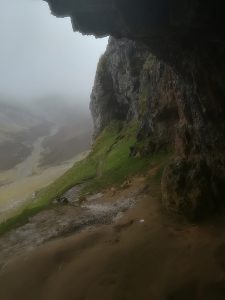 Even when I finally climbed up there, it was difficult to enjoy, given the height of the caves and the nasty wind.

I picked my way down the slope and, back towards the stream that I needed to follow to eventually cross over to the glen. What I hadn’t noticed was a tiny line on the map that said ‘waterfall’. I barely saw it until it loomed, 60 feet above me (ok, maybe 40). 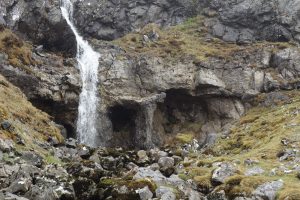 It would require a scramble up a steep bank (I can always go back) which was far too unstable on my first attempt (going back…wait, what about there…) but doable on my second. I then followed a wetter riverbed, hopping from shore to shore, until the next landform I was to follow appeared.  What looked like a small tributary on the map rose up like a drystone giant’s staircase. I didn’t have to walk it, just follow it.

The walking was not fantastic, and I was expecting a whole lot more of what looked like folded turf as I entered an area covered, on paper, by that most dreaded of map symbols; bog (actually, it’s heath or grass-land, but this is Scotland….) Along side the staircase, repeating my mantra (ICAGB), I concentrated on where I put my foot down next, through what seemed like an endless repetition of turf mounds and puddles. I missed the part when the cloud came in so low that the great hills around me disappeared. I could always go back, changed to a shakier Could I go back? As the staircase disappeared and the landscape continued to rise gently, unchanging as I moved ahead, my way back also disolved into the mist. So now, my way forward AND back were no where to be seen.  Was this lost? All I could see in any direction was all that wet grass fading into thick fog. Concern gave way to rising panic; and overly dramatic versions of my predicament played in my head (they’ll find MY bones…).  To calm myself, I sat down, and started rummaging through my snacks. Eating could help (could eating help?). Hydration and calories clear the mind, give one strength and (hopefully) reassurance…I was in a ‘just how stupid am I’ line of questioning, wondering if mountain rescue would be required. No surprise, the food and rest did help, and I finally quieted the voice in my head enough to decide to go forward. It was the original plan, I was not hours off my route, and despite the low/no visibility, shit could happen in either direction.

Still without views of the major landforms that surrounded me, I continued.  Eventually I picked out some small lochen and used them to orient myself. Although I do not possess advanced compass and map reading skills, I understand contours and how they express land form (THANK YOU Landscape Architecture School). I headed in the direction of what read as a lower elevation, and eventually could see a slope downwards. It was going down, I was following it, and the relief was enormous. 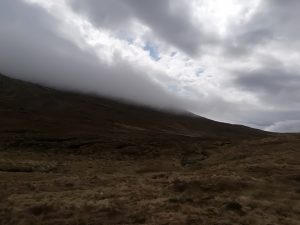 It was a fairly rocky slope, but not hard going, and the mist had cleared just enough for me to make out another larger lochen in the distance that I KNEW was at the far end of the glen. HALLELUYAH!! 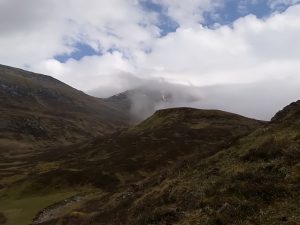 From where I had come, the right of the peak in the cloud, or left; not sure.

Some study of my map was still necessary to make sure I was well oriented (towards not away from the lake), because the cloud was only beginning to lift. But as I became surer of my location, I relaxed and decided I didn’t need to join the clear path that I could see in the distance. As long as I followed its approximate direction, I knew I would reach the lodge. The views in the glen were clearer and clearer, I could finally enjoy moving through this wild landscape, and slowly make my way along it, following the variations in the beautiful, changeable terrain. 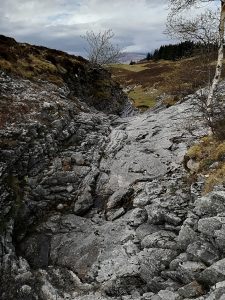 What a walk. It struck me, as I recently gathered the images to present it, that this was the story I most wanted to tell about my last trip…well, one of them.  It was not the hardest work I did; I climbed Ben More on my first jet-lagged day and followed a hostel friend over an isolated but terribly windy bealach a few days later. Some of the ascents I did in France later that month were annoyingly long and painful. But this was a walk into the unknown, when I challenged myself to go forward into the mist, rather than go back. It’s the kind of walk that builds confidence, encourages more of those ‘boldly go’ moments, and makes future adventures, solo or otherwise, incrementally more exciting. 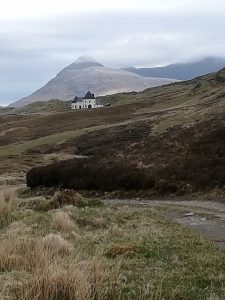