So here it is, my third and final installment of my East Coast Trail Walk Report. I am sure you will enjoy it, if only the amazing landscapes that you can see throughout this and the other two sections. Do not hesitate to comment, correct, or congratulate…as you wish. Its been my pleasure to bring this adventure to life for you and for me as well, if the truth be told.

A long and excellent day. There was so much to see on the Flamber Head Path. Leaving Brigus South, I soon started the series of climbs and descents that were characteristic of this section of the Trail. 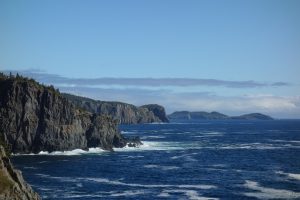 I ran into Sue and Lance, (day 1 and 2) and they accepted my invitation to stay at the cottage with me on that, their last night on the trail. There were some incredible views and rocks, and after the longer, more strenuous first section (11.5 km), the extra 5 kilometers from La Manche to Tors Cove were straight forward. La Manche is an abandoned village, destroyed by a tidal wave in the 60’s. There were actually very few vestiges of the town, wood construction being less durable, or easier to remove and reuse than the stone of Scotland’s cleared settlements. And there was another wildlife sighting; three seals relaxing under the bridge at La Manche. Arriving at Beauline East, the colours of the few buildings around the cove popped, and made a beautiful but spare backdrop to the many fishermen arriving and preparing to take out their boats.

Once again, as I approached Tors Cove, Edna travelled down the road as far as she could to collect me. Sue and Lance joined me at the cottage a short while later, getting a lift from Martha and Barry, one half of the small party I met on that sunny hillside on the Sugar Loaf path. We shared a quick drink and later a lovely dinner. 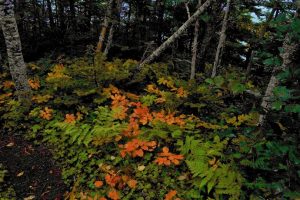 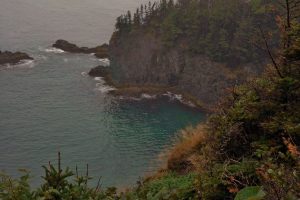 Woods in the rain

It is 3:27 PM Newfoundland time, one and a half hours earlier in Montréal. I’ve been off the trail for two and a half hours, warm for an hour and a bit. I am in my cozy cottage watching the rain pour down and feeling a bit smug. I took my hike at 10 this morning in the rain, a light rain, and it was actually an excellent hike. I walked slowly, and carefully, stopped to pick partridge berries and enjoy the many views out onto the foggy coast. 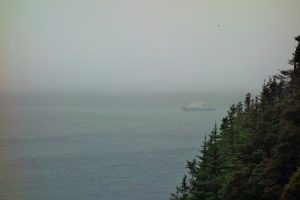 A friend in the distance

Got progressively wetter as the walk wore on, but it wasn’t a problem…until the walk ended on an overgrown lane that seemed to be typical of the area. I walked, got colder, walked faster, until a local gentleman TURNED AROUND and offered me a ride to Cape Broyle, just up the road, so I thought. When I arrived at the place, Riverside Restaurant, Martha and Barry, and their friends were just finishing their lunch. I joined them for a cup of tea, and they offered me a lift back to the cabin. Once again, it was good to chat with other walkers, see what they had liked, what they were yet to do. They had decided not to hike that day and were, perhaps, wiser than I.

Spent the first ¼ just loving the path and the views and all and all, but the last ¼ b**ching and moaning that it never seemed to end. The first part was delightful. Past some cottage country, some extremely picturesque farmers’ fields, and the whole of the flat end…however you want to call it, with its grassy plains exposed to the sea, incredible rock formations, and largely walkable paths. 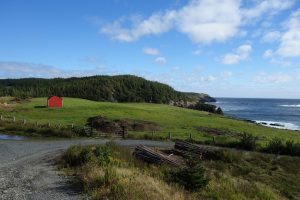 I described the path as I walked, to myself of course, and it felt like the ‘difficult’ rating was an exaggeration. Not quite. The path spent at least half of its length in the woods, and they were wet given the full-on rain the day before. Again I described the path as I watched it intently; the path became the walk, I became the path, following its climbs and descents all the more closely because of all the water everywhere. 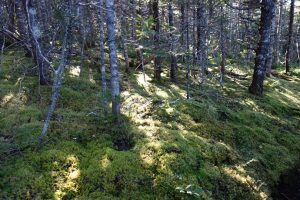 That is the bit about hiking that doesn’t thrill me; Looking at my feet and feet and feet and up – the trees, and back at my feet. On the ECT , this has been mitigated by the amazing views of the coast and cliffs and, depending on the day, the sparkling or endless grey of the ocean. That didn’t quite work today. The other unfortunate event was the loss of my maps and map holder. Like all the ECT trails I walked, the trail itself is generally very well delineated. I used maps to give me a realistic idea of my progress. With no map, the GPS reading on my phone (my location, no path coordinates) only gave me absolute distance from my end point, with no idea of actual trail distance. Add to that, end of hike-itis, knowing that I was late, making Edna wait, and I was less than pleased at what seemed to be a never ending end, even after leaving the painfully boggy woods. The next day’s almost 20 k was looking less and less appealing. But home I went, packed up and got ready for a 7:30 am departure the next day.

There should be a whole chapter written on Shoal Bay Road – Rocky, wet, a complete lake, sometimes a full-on river, two hours of stream jumping, side stepping and wading through the most unpleasant pathway EVER. My hiking companions and I decided that the only way we could ever consider the Spout Path (going south from the coast) was to do the hike from Bay Bulls through to Petty Harbour. It’s close to 30 k, but ANYTHING to avoid Shoal Bay Road. It’s a plan. 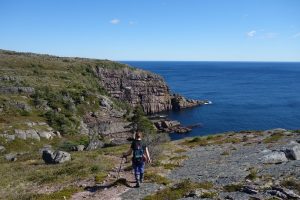 But really, Motion Path was exquisite. (am I running out of adjectives??) as promised, it was largely open rolling landscapes, easy walking (once away from Shoal Bay Road). The most Scottish of the trails I would say…where’s the sheeps?? The vegetation was mostly low, but much of it was brilliantly coloured from the approaching autumn.

Cuz it was summer on the trail folks, bright sun, bluest sky and sea and views out and across the gentle hills. 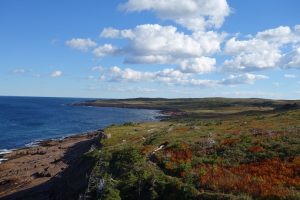 It was only my second day of walking with people and it was excellent; sharing the amazing scenery, moose sighting, as well as the little frustrations. There was a tougher bit getting down into Petty Harbour, and although we were all feeling the end of the day (not just you Delores) it was a sweet sweet end; the greatest of finales to 140 km of beauty and moving forward. 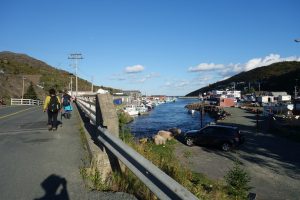 “The stairs down to the stage face east. I know this because it’s the first place to get warmed up and dry in the morning; it’s where I have my coffee. 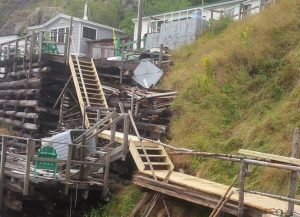 I’m sitting here, warm enough to undo my down layer, trying to plan my exit day from my two week plus Newfoundland hiking and eating odysee. Thing is, I don’t want to move. Although this is the wilderness in the heart of Saint john’s, I am finally so calm and comfortable right here, that I have chosen to write on my phone rather than pack up and migrate to one of the excellent local cafes to spew my guts about this adventure. Right, because that may be one of the side effects of travelling alone; the need to ‘say’. In the end, I may have stayed longer than I wanted in that spot, but I was fine thanks, sitting in the sun in St. John’s harbour.“

I find this accommodation vs activity contrast once of the interesting sidebars of this particular trip. On the whole, when I was walking/hiking, I stayed in very comfortable places, with all the facilities I could desire, and then some. In the civilization of St. John’s, I was either at an unfinished house in a disreputable neighbourhood (although, it was not actually a problem) or a non-house, that while meeting Maslow’s basic needs, was in fact of form of urban camping. Again, the hiking itself was no great hardship. I often did very long days, 15-20 k, and was beat at the end of them. The trails were not at all (or rarely) obscure, and the bogginess and repeated climbing and descending were almost never an issue. I was outside, moving through the landscape, at the speed I wanted to be. I did a lot of play-by-play walk narration in my head. Because I’m a loon? because I’m alone?…who knows, but that talk, eventually finding itself written, becomes the walk. or what i can share of it. I think.

But where did that leave me, at the end, finally back in the city? Well, judging from the first paragraph, it left me with no complaints. What so ever. After two 18-20 km days, I arrived back in St. John’s with all my stuff and ‘hiked-in’ to the Stage. Once I dropped my bags, I sat by the door in the late afternoon sun, slowly sipped my beer, ate my chips and watched the sun drop down behind the hills surrounding the harbour. The next day, was similar, but with a book I found at Steve’s, the increadibly compelling Hard Light by Newfoundland author, Micheal Crummey, I sat outside in the sun, until I made my way out of the Battery to a place where a cab could actually find me.

Back to WALK REPORTS